Depew The Michelangelo Way to Realizing Your Vision Like a Genius

“If you knew how much work went into it you wouldn’t call it genius.”  Michelangelo 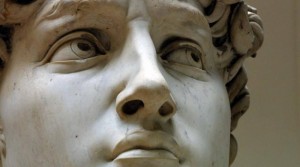 Webster’s definition of vision : a thought, concept, or object formed by the imagination. My definition: Vision is a combination of wishes, dreams and ideas with vivid imagination based in possibility.  There is a realistic edge to it, as wild as it may seem.

According to legend, an awestruck admirer looked at Michelangelo’s finished statue of David and asked him how he’d done it. Michelangelo replied: “David was always there in the marble. I just took away everything that was not David.”  Story has it the piece of marble was humongous “scrap” piece.

In 1501, when Michelangelo started his work,  he promised his patron to carve a statue from this block without cutting it down or adding other marble.

He knew what he was going for.

He had the vision of what “David’ was going to look like.  I imagine he felt the essence of it inside himself and the marble. We’re talking marble here, so  he must have had a deep knowing of what he was creating.

While this is a fabulous example of vision, it also makes realizing your vision sound easy.But easy is the furthest thing from the truth….

Having a vision definitely pulls you forward,  It can feel a little like being enchanted — you can’t stop walking towards it.

At least that’s how it can feel when your vision is clear.

However, when it’s not so clear, it feels more like a wrestling match than a walk into a beautiful enchanted meadow.

You might have an idea of what your vision or dream is, but it feels buried somewhere deep inside. Or you might not have a clue.

Either way, good chance there were times in your life when you wanted something and you made it happen. It was worth whatever it took to make ‘it’ a reality. You did the hard work and didn’t let anything stop you.

Realizing a bigger vision is a lot like that. Start by giving yourself  permission to imagine what your realized dream would look …

“Michelangelo worked with his hammer and chisel to remove the marble that was in the way of his vision of David. I believe we each have a masterpiece inside of us waiting to be revealed.”

Three Steps to Realizing Your Vision

Muluppilagadu 1.  Get clear on your Vision. What makes your soul sing? What Big Bold Dream gives you a smile when you think about it?  Think about a time in your life that     you had a goal and you made it happen. Perhaps this was a trip, a surprise for someone you care about, something you wanted to own.

buy Pregabalin online eu 2. Get clear on what it is not. Sometimes, when we think about what we don’t want it reveals what we do. Write a negative list, and then reverse it.

3. Taking away what it is not. What do you need to let go of in your life?

What vision is inside you waiting to be brought into reality?

What step are you on?  How clear is your vision?

Want to join the discussion?
Feel free to contribute!

History is thankful Monet took the Challenge
Scroll to top